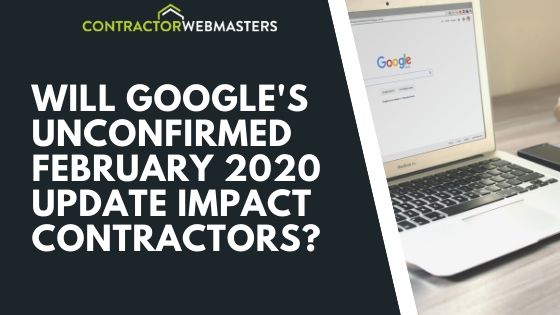 According to industry experts, Google has been making frequent updates to their algorithm in the last month. As a small business owner, you may be wondering what that means for your contractor SEO strategy and whether you have the processes in place to continue generating online leads after February.

Those changes, which are largely unannounced and never have a direct “fix” to them, can have substantial impacts across the web and on a variety of industries. Unfortunately, it is up to those websites affected to figure out what changes occurred and how to combat them.

And as of this past weekend, it seems that Google has pushed out some sort of ranking algorithm change that has resulted in a large shift in the rankings of many websites. While it is uncertain on just what this February 2020 update has done, Google has not yet commented on the speculation surrounding this update nor has it even confirmed that the update occurred.

Much like the February 2020 update, Google’s search results are constantly changing. This means that new pages are coming into the index, new signals get refreshed, and that Google makes literally thousands of changes each year.

This is common knowledge and something that the only SEO community has been dealing with for a long, long time. Still, it is not that often that the community sees such a big spike in both the rank checking tools and the SEO community chatter.

To say that Google’s February 2020 update has a substantial impact that we have yet to understand would be putting it lightly. While it will eventually be realized what these changes were and how they impact websites, it is a bit like feeling around in the dark at this point for many websites.

According to some of the most popular rank checking tools, there have been substantial changes. It is important to note that the tool providers have stated that they don’t count the featured snippet deduplication or user interface change with their rank changes.

While there are those that suspect that these changes are the result of these tools showing ranking fluctuations, it doesn’t seem as though that is accurate at this time. Essentially, most of these tracking tools are registering “off the charts.”

This doesn’t necessarily mean that the changes were good or bad, but there are a substantial number of websites that were impacted according to these tools.

Some Main Points of Major Reports

After Sunday, February 9th, the rumors of a big February 2020 update began to circulate, speculating that there were “really big, maybe even massive” changes that were taking place within Google’s search results.

Since then, more reports have emerged and there are a few points worth noting when it comes to this update:

The Problem with Updates and Google’s Communication

Since the Core Update back in March 2019, Google has made it a practice to announce or even pre-announce major updates to their core algorithms. The communication policy was introduced as an attempt to increase transparency as well as prevent some speculation from spreading.

Still, there have been plenty of times since then that Google has not provided consistent communication. This was evident in the November 2019 update, which didn’t have any pre-announcement and was only acknowledged by Google after numerous SEOs had been affected in the rankings.

Whether we like it or not, what Google discloses is up to them and it is up to us to fill in the gaps. When there are updates with no communication, as seems to be the case with the February 2020 update, it is up to users to determine where the biggest SEO ranking changes have occurred.

Even when Google does acknowledge that a change may have been made, it is vague at best. Google even commented long after the November 2019 update by saying “we do updates all the time.” I would suggest rereading our general advice about this.”

That is not much as to what the update was, how it impacts websites across the net and what changes need to be made to improve the affected SEO rankings. This can lead to frustration for users in determining where the biggest changes have taken place.

What Contractors Should Do About The February 2020 Update

The best idea for finding out what changes have been made is to wait for the SEO community to figure it out. Sure, being patient is not always easy but unless Google is transparent about their updates, there is no other way to know what has happened.

Google posts updates at times through their Search Liaison account on Twitter, but other than that, it can be like feeling around in the dark when it comes to their algorithm updates. And with the impact it can have on the SEO rankings of websites, it carries serious implications with it.

Keeping your ear to the online community and seeing what they uncover is the best course of action for finding out what changes may have taken place and what impact they could have on your website and your business as a whole.

SEO is an ever-evolving tool in the online marketing world and while Google has the aim of providing the most efficient rankings possible, it can be frustrating in the days after the update.